California laws changed the first of the year to make it more difficult to obtain and renew disabled parking placards.

I wish I could jump for joy. But I can’t because I’m disabled. And I don’t have the time to even try. I’m too busy looking for a handicapped parking space while sneering at able-bodied folks using the spots.

Often they are just shoppers or restaurant patrons, but these dastardly motorists include Uber drivers, construction workers, delivery people and armored truck drivers (all of whom have blocked some of the handicapped spots where I have tried to park).


Since cancer left me disabled nearly 13 years ago, I’ve been growling at cheaters and ranting about them in my blog and social media. I’ve appealed directly to my local law enforcement officers, praised the occasional sting operation and investigated ways to report the crimes (There's nothing really effective. Parking Mobility has hopeful merits but it's not for me, when I'm driving alone.)

And now, on the heels of a scathing state audit that showed California’s administration of the disabled plates and placard system embarrassingly sloppy, the state implemented a law January 1 that begins to address the problem.

I think the law should have been harsher (given the magnitude of disabled parking fraud), but it’s a start.

Consider some horrifying statistics from the audit:

— Of 2.9 million placard/plate owners in the state (about one in 10 drivers), auditors estimate that in a three -year-period, 1.1 million placards/plates were issued without proper medical documentation (required to obtain a card).

— During that same time, 260,000 applications were approved with questionable medical signatures.

The problem, the audit concluded, was multifold, but boiled down  to improper tracking and enforcement and lax rules that let cheaters get away with using placards they shouldn’t have.

The new law will put some tighter rules in place: making changes to the application process to require more detailed verification about what qualifies the person for a placard, a change in the automatic renewal process for permanent placard holders, and a limit on the number of replacement cards a holder can receive.

Previously, if you get the blue permanent placard, it would be good for two years. At the end of that period, a new one just appears in your mailbox, free of charge. As I wrote in a previous blog post, this just invites misuse. 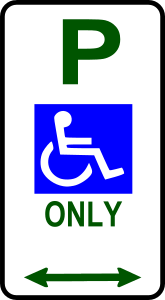 The new law mandates a renewal process requiring applicants to fill out a notice every six years, beginning with the placards expiring in 2023.

It's a step in the right direction, but not strict (or quick) enough. Why not require an occasional recertification by a doctor?  Some might find that burdensome, but I’m pretty sure disabled people see a medical professional fairly often, so it would be no big deal to get another signature every four or six years.

Another aspect of the new law is a limit on how many replacement placards a person could get. Before, you could get a replacement if yours was lost, stolen or damaged by filling out a form and giving it to the DMV. In nearly 14 years of using disabled placards, I only remember one time when I had to get a replacement (and I am constantly dropping and losing things). But the audit found with no limitations, people abused that option. Big surprise.

Nine people had requested and received 16 or more placards over a three-year-period and two had applied for and received 20 or more.

Now, the new law limits you to four replacement placards in a two-year period, without having to get a medical certification. Again, I don’t think this strict enough, but at least it’s something.

Other audit recommendations the DMV is adopting are improving record-keeping, matching its files with death records, working toward a system where a traffic enforcement officer can check a database of registered placard owners, and scheduling, monitoring and publicizing more stings.

And there’s another one that the DMV pledged to implement: a public awareness campaign (similar to the seat belt and texting ones) alerting the public that it’s NOT OK to park in a disabled spot or to use a placard illegally.

Seems like common sense, I know. But unfortunately, there are lots of folks out there who use someone else’s card, use them after their loved ones die, sell them on the internet or visit doctors who promise to sign a disabled plate certification for a fee. And that doesn’t include the flagrant violators who think it’s OK to park in the spots “just for a minute” (like to use an outdoor Redbox movie dispenser or pick up take-out food) or think their work (construction, Uber driving or delivery) trumps the law.

While the enhanced rules and plans won’t solve all the violations I see on a regular basis, it has to help. With better scrutiny of the application process, an emphasis on improving enforcement and a public awareness campaign, maybe — just maybe — people who regularly break the disabled parking laws will curb their inconsiderate, illegal behavior.

That would be great news to those of us who depend on those spaces.

Posted by Laura Laughlin at 2:49 PM